Rights to Education in Ancient India

December 08, 2013
The Rights to Education in Ancient India are still a hot debate topic for the advocates of humanity.
Even I have been intimidated by the discrimination the ancient Indians showed to the lower classes by denying them any education that was beyond their circle of skill or living.  Only the Kshathriyas and Brahmins were allowed the privilege of higher education. But by analyzing the living conditions and intellect of the age it is livid that basic education was provided to all, like basic arithmetic and life science.  Then why the discrimination in providing higher education? The reason was always  simple. 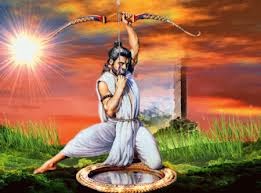 In ancient India the most difficult of all arts was the art of archery. This was the highest and toughest art to be mastered as the sharp and sleek weapon fired off from a distance can hit the spot only with the trained knowledge of aligning the arrow and pulling back the string in perfect angle to the blowing wind or moving target and a miss of the target can easily be fatal to any living thing in the trajectory. This had to be mastered through constant practice and expert guidance. In the era only Kshathriyas and Brahmins were powerful enough to spend money and time in such an art. Moreover, Kshathriyas being the ruling class and Brahmin being the elite class were used either to the luxuries of court life or else to penury, pain and struggle. But none of these classes practiced any menial labor or never knew physical pain and hence were never trained to bare intense pain. They will fall back the instant they got slightly hurt or a spot of blood will have affected their emotions. They could also not bare the sight of blood or suffering of another creature and if they were the cause they would take great care that the creature be finished off quickly so that it will not struggle with the pain for long.


Quite contrary to this was the mindset of the lower classes. They labored day and night and were used to heat and cold. They could easily bear pain and the sight of blood and suffering were only a common sight to them and so they can stand watching a suffering life or rushing blood and perhaps will only take pleasure in the suffering of another life. Their pass times included wrestling and fights and small wounds were familiar to them. Such classes in possession of the art of archery could easily be the cause of peril . They could stand the sufferings and could misuse the art unlike the higher classes who were more rational in behavior. The best justification of this logic comes from The Mahabharatha where Karna the first born of Kunti who was disowned by his mother at birth and adopted by a charioteer was denied tutelage under Dronacharya, approached Parasurama  -Drona’s Guru- disguised as a Brahmin. Parasurama , unaware of the disguise accepts Karna as his student and trains him to be the best archer . Once while Parasurama was sleeping resting his head on Karna’s  lap, an insect crawls into Karna’s calf and bites into his flesh. Brought up by a charioteer Karna bares the pain even when warm blood starts gushing from his leg. Parasurama wakes irritated by the moisture that wet his face and realizes that his face was soaked with Karna’s blood.  The realization dawns on Parasurama that the boy was brought up by no Brahmin as no Brahmin or Kshatriya has the capacity or will power to bear such intense pain. Only a person brought up in the lower strata has the ability and will to be one with physical and mental pain of one’s own or of another.