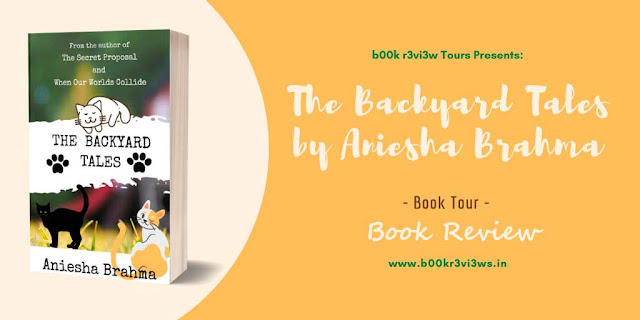 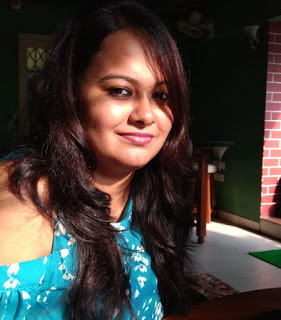 Young Adult and Children’s novelist, Aniesha Brahma, studied Comparative Literature. She started her career has as a social media manager in a publishing house. Currently works as a senior content writer in a digital media agency. When she is not working, she is dreaming up stories, conducting sessions for her popular YouTube Series, Chai & Chill, or planning how to get even more books and bookish content to readers via BUZZ Magazine. You can read more of her work at Aniesha’s Musings and drop a line at: aniesha.brahma@gmail.com

The Backyard Tales is the story of the bond shared between 17-year-old Mia Basu Roy and her beloved cat, Pippo. She seems to understand him far too well for a human. And he seems have another life that Mia begins to suspect. She follows her cat to their backyard and down a very dangerous road which leads her to witches, talking animals, and a story that’s much bigger than what she initially suspected.

Cats don't ask for the moon; they're already stars. - Odin Wilde
My entire childhood was spent reading all the Enid Blyton and Harry Books I could get my hands on, watching all the Barbie movie series, and always wondering why such mystical lands and stories did not exist in India. If at all there existed any stories of magic, they were strongly based on occult superstitions and horrifying black magic related stuff, and that too only in movies, not in books that were in English. All these long years of waiting, and finally this book delivers me from that plaguing thought that no Indian has tried to place those mesmerizing magical elements on Indian soil to spin a yarn that is at the same time mystical and intriguing. As Mia Basu finds her connection with her cat strengthening day by day, the connection between the natural world and human innocence itself seems to find an unfathomable interlinking through their ever blossoming kinship.
Most of us might have pets who are closer to us, whom we consider our little siblings and those little creatures who always seem to find that sweet spot with our mothers who initially objected from bringing them home at all and finally end up having our furry friends tailing them like a shadow wherever she goes! Pippo is no different and as intelligent and cunning as cats can get, he also takes up the mantle of a fierce warrior, first fighting to win his freedom from the tight confines of home,  fighting to prove that he is not a spoiled house cat, fighting to save his fellow friends and even putting his life on the line to save his "mini owner", the cat never fails to prove his mettle!
The meticulous details in the musings and exchanges of the animals and the well-structured plot seamlessly weaves together mystery enshrouds the incidents that unfold within the story.  The characters themselves are familiar, yet unfamiliar in a way that it is easy to picturize them, but impossible to predict their actions or feelings. The sudden courage that Shekhar finds when facing his father, the odd way in which Ricky deals with his perpetually quarreling parents and the instinctively unpredictable actions Mia adopts to come to the aid of her furry friends are all relatable but unassuming.
Something alluring is to me the realization on the predictive nature of humans to readily revamp any unused, abandoned building or plot to replace it with something profitable without much thought on what would it do to the stray animals who seek shelter in such places. An old big tree when facing the threat of being chopped down swiftly attracts the attention of nature lovers who categorically argue left and right on the importance of the tree sustaining a healthy ecosystem within and around it. But an old building facing the threat of demolition is never thought of as anything other than an eyesore to anyone without considering how even a building of such could be a shelter for the stray. Security reasons apart, we have been forcefully claiming land and shelter of the living creatures in vast areas and are reluctant to maintain any sort of wild patches in our vicinity, afraid of the wild dogs or cats or even snakes it could possibly shelter. The Backyard Tales emphatically gives voice and purpose to those stray animals who are threatened by the imminent loss of their shelter and refuge. We are immediately threatened by the sight of a stray dog around our place and like Mia are afraid of the safety of our own pets and lock up all possible entrances and clear up all overgrowth or abandoned buildings or sheds without to thought to the animals around who might need a shelter somewhere from the cold of the nights, the heat of the sun and the wet rains.
Delving into this exchange between Pippo and Brown we see how they don't even know if and where they could find a place to even sleep:
""Well", the street cat said, slowly, "you have a home to go to at 2am. Do you know where I am going to sleep at 2 am?"
Pippo shrugged his furry shoulders. Brown let out a sigh and said, "Even I don't know. Which is sad Pippo. Those who live on the streets have to find a different home every single day".

The book is more than a fantasy novel that traces the relationship between a girl and her cat or the adventures they share or narrating how two worlds (animal and human, mortals and magicians, the domesticated and the stray) collide on many different planes, but also tentatively makes us think of the insecurity and vagueness of the next moment the animals in the wild face.

Read this story to discover all of Mia and Pippo’s secrets, be enchanted by magic, and get the answer to a question that has haunted us for ages: does a cat truly love their owner?