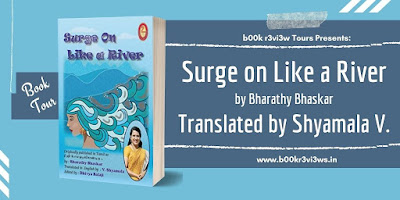 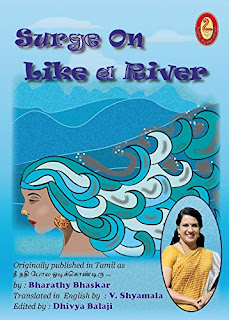 Surge On Like a River is the English translation of the Tamil book titled ‘Nee Nadhi Pola Odikondiru’, originally written by Bharathy Bhaskar, a Chemical Engineer and an MBA, who is a banker by profession. She is also a popular columnist and speaker, and a household name in Tamil homes, thanks to the debates and shows she has spoken in.
The essays are written in a simple, engaging style, and filled with profound insights. These nuggets of wisdom primarily draw from the author’s life experiences and her empathetic observations of the people and situations around her.
This English translation by V. Shyamala captures the lively nature of the original, bringing it to a wider audience with the idea that the readers who do not know Tamil should not miss out on the wonderful collection.
Purchase Links
Amazon India | Amazon USA

Guest Post by V. Shyamala
When I read out aloud ‘I am Malala’ to my 8-year-old daughter
‘I Am Malala: The Girl Who Stood Up for Education and was Shot by the Taliban’ was the first full-length autobiography that I read out loud to my daughter when she was eight. Till then, I had only read out picture books and short stories to her.
Why I choose this book – you might wonder. Well, it just happened that in school, at a fancy-dress competition held for older children, a child dressed as Malala was awarded the first prize. My
daughter wanted to know about the girl who had inspired that dress. I just gave her a two-line explanation – ‘Girls were not allowed to go to school in the part of the world where she lived, but she went ahead anyway, and so was shot at for going to school. But, don’t worry, she recovered and now lives in London.’
My daughter was not satisfied.
I had the e-book (the detailed version co-authored by Christina Lamb) on my Kindle and started reading out parts of it to her. But she was not satisfied with that either and wanted me to read the whole book. Though initially, I felt this book was not appropriate for her age, when I started reading it aloud to her (I would read a chapter a day), I realized she was mature enough not only to understand it but also to ask me insightful questions. We had many conversations on religion, gender bias, the role of education, freedom… all weighty topics indeed! I tried to be as honest and balanced as I could. I too learned a lot in the process!
Malala said -“One child, one teacher, one pen and one book can change the world.”
This book changed the world for my daughter. Malala’s story made her think on a deeper level and try to understand issues from different perspectives. Though I kept myself from sermonizing, she realized how lucky she was to have been born in a part of the world where she was relatively safe and had the right to education. How lucky she was to whine about homework and projects when many children – especially girls – around the world were attacked if they so much as wanted to go to school!
After this, she started reading children’s novels. Now my daughter is 10, and she has already read the book twice by herself!
This is the power of books, the power of stories. They open up new worlds, offer new perspectives, and elicit new insights. They help us understand the ‘other’.
This incident opened my eyes to stories around me – stories told by my grandmother and mother – about Avvaiyar, Goddess Meenakshi, Dr. Muthulakshmi Reddy, Rani Velu Nachiyar, her commander-in-chief Kuyili… the list is really long. There are innumerable stories in Indian languages that are not known outside a particular geographical area or beyond a community that speaks the language. My first translation project of Smt. Bharathy Bhaskar is my first small effort to bring a good literary work in Tamil to a wider audience.
Glossary Terms:
Avvaiyar: Poetess of ancient Tamil Nadu, her name means ‘a woman of respect’. Here, the reference is the first Avvaiyar who lived during the Sangam period (c. 3rd century BCE).
Goddess Meenakshi: A Hindu Goddess whose temple dominates the city of Madurai in Tamil Nadu. A warrior queen, she is believed to have conducted a military campaign in the north till she reached Kailash, where she met and married Lord Shiva.
Padma Bhushan Dr. Muthulakshmi Reddy – one of the first women doctors in India, the first female student to be admitted into a men&#39;s college, the first woman House Surgeon in the Government Maternity and Ophthalmic Hospital, the first woman Legislator in British India.
Rani Velu Nachiyar - Known as Veeramangai (brave woman), she was the first Indian queen to fight and triumph against the (British) East India Company. She ruled Sivagangai for 10 years from C.1780 to 1790. Kuyili was her army commander-in-chief and considered to be the first suicide bomber in history who destroyed the British armory.
About the Author 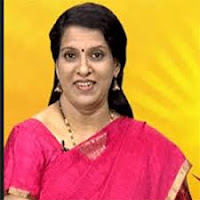 Bharathi Baskar is a Tamil Orator who is popular for her humorous debate talk shows called Pattimandram.com, telecasted on Sun TV. She is also an anchor for the daily talk show called Vaanga Peasalam at 7.15 a.m from Monday to Wednesday on Sun TV. Bharathi Baskar is also a Senior Vice President at Citi Bank, Chenna
About the Translator 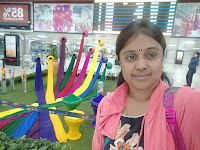 V.Shyamala is a cost accountant, a homemaker, and a writer. She loves to weave stories and is on a continuous quest to seek new and creative ways to teach children. When not writing, reading, or thinking up stories, Shyamala mentors CIMA students, strives to workout, loves tweaking South Indian heritage recipes, and translates Tamil words to English. She is also a member of AWIC (Association of Writers and Illustrators for Children) and volunteers at a local library twice a week.